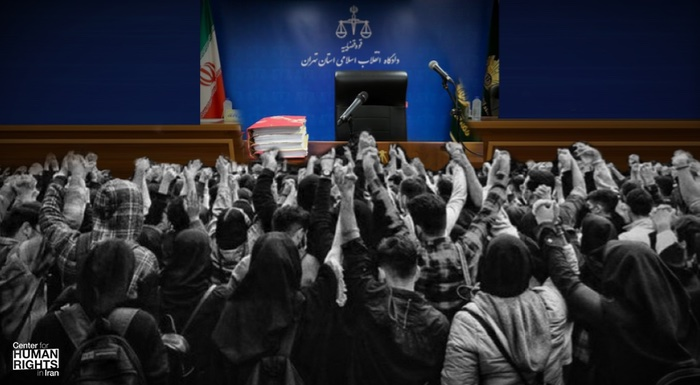 November 2, 2022 – With mass public trials for protesters recently announced in Iran, and charges already beginning to be issued that could carry a death sentence, it is urgent that the international community forcefully warn the Iranian authorities against leveling death sentences against the protesters, the Center for Human Rights in Iran (CHRI) said in a statement today.

“The international community must be clear with Islamic Republic authorities that death sentences for protesters will result in an extraordinary intensification of the Islamic Republic’s political and economic isolation,” said Hadi Ghaemi, CHRI executive director.

“Issuing death sentences against the protesters—after the Iranian authorities have unlawfully arrested tens of thousands of peaceful protesters and killed hundreds through the indiscriminate use of lethal force to squash the protests—is a blatant attempt to terrorize the Iranian people into silence; it will cement the Islamic Republic’s status as an outlaw state that has no regard for law or life,” Ghaemi added.

In a meeting of the Judiciary’s Supreme Council on October 31, 2022, Tehran Province Prosecutor Ali Alghasi Mehr said some 1,000 indictments had been issued in connection with recent “riots,” and that “trials were scheduled in the Revolutionary Court for cases against a number of individuals” and “would take place in public in the coming days.”

In the same meeting, Judiciary Chief Gholam-Hossein said, “Those who intended to confront and subvert the state with ties to foreigners, will definitely be punished according to legal standards.”

Earlier, the judiciary’s official news agency Mizan reported that as of October 30, indictments had been issued in the following provinces: 315 people in Tehran, 201 in Alborz, 119 people in Zanjan, 110 in Kurdistan, 105 in Khuzestan, 89 in Semnan, 55 in Qazvin, and 25 in Kerman in connection with recent protests. Since then the numbers have increased, considering the Tehran prosecutor’s announcement a day later that 1,000 detainees had been issued indictments in Tehran province alone.

On November 2, the judiciary announced 45 indictments had been served in Sistan and Baluchistan province against “individuals who had a major role in recent riots.” None were announced against authorities responsible for the massacre of dozens of protesters in Zahedan, the province’s capital, on September 30.

October 30 marked the beginning of a trial at Branch 15 of the Revolutionary Court in Tehran of six people charged with “waging war,” “corruption of earth,” “assembly and collusion against national security” and “confronting the Islamic Republic” for participating in the protests that have swept Iran since the death in state custody of 22-year-old Mahsa Amini after she was arrested by the morality police. “Waging war” and “corruption of earth” are both charges that can carry a death sentence.

The trial was presided by the notoriously hardline Judge Abolqasem Salavati, who is routinely handpicked by the judiciary for political trials.

Mohammad Ghobadlou’s mother posted a video online on October 31, saying her son had been sentenced to death without the presence of his lawyer during the trial. “Is this Islamic justice?” she asked.

A human rights lawyer in Iran, who asked not to be identified, told CHRI that a detained protester, who wanted to be represented by a lawyer, was told by interrogators, “If you pick him as your lawyer, your case will get more complicated,” which forces the protester to either defend himself or pick a lawyer approved by the judiciary.

Iranian Lawyer: “This is a security process, not a judicial one”

Human rights lawyer Saeid Dehghan told CHRI, “Based on the announced charges, such as ‘waging war’ and ‘corruption of earth,’ some of the accused could be sentenced to death. The detainees are being held without having been officially charged or being able to meet with a lawyer, or contact family.”

“In reality, this is a security process, not a judicial one. The security establishment wants to quickly issue sentences and doesn’t care about legal procedure. The courts are just acting as rubber stamps,” Dehghan said.

“According to Iranian law, prisoners are entitled to a lawyer as soon as they come under investigation and during the trial. But they are not following the law. The charges against the people arrested in the protests are political and therefore they should be tried in a court for political crimes, not the Revolutionary Court,” he continued, adding that “All the confessions extracted from the detainees have been under torture.”

“For these reasons, I believe there has been a collapse of the Islamic Republic’s legal system, especially in recent years,” Dehghan said.

The world must speak out—heads of governments around the world, U.N. officials and experts, and international professional associations of lawyers, journalists, doctors, teachers, athletes, cultural figures and others—should publicly condemn the violent and lawless behavior of the Iranian authorities, and communicate clearly to Islamic Republic officials that meaningful costs will intensify with their continuation.

“Death sentences against people for exercising their right to freedom of expression, after the killings of peaceful protesters, abductions and gunning down of children, and other atrocities, indicate a government that is out of control and willing to squash protest at any cost,” said Ghaemi.

“Without strong coordinated international action, the world gives a green light to this carnage,” he added.