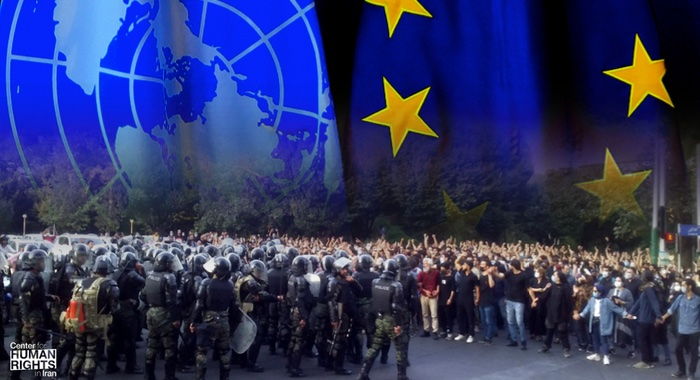 October 18, 2022—With security forces in Iran continuing their month-long assault on peaceful protesters, the only way to stop the killing in Iran—which has left more than 200 people dead, including at least 23 children—is international action that imposes meaningful diplomatic costs on the authorities in Iran, according to a new policy briefing released today by the Center for Human Rights in Iran (CHRI).

“The Islamic Republic is committing unprecedented atrocities, especially against women and children,” said CHRI executive director Hadi Ghaemi. “Security forces are shooting to kill peaceful protesters, while schoolgirls are being rounded up and sent to ‘psychological centers.’ Further atrocities will take place without meaningful global action.”

“The international community must move beyond ineffectual condemnations and collectively impose meaningful diplomatic costs to stem the carnage in Iran,” Ghaemi said. “A state that kills and abducts children for participating in peaceful protests is one that no longer has any check on its actions, legal, moral or otherwise,” he added.

The nuclear deal with Iran cannot be isolated from these events and must be put on hold. A significant release of funds for the Islamic Republic will flow from this deal, which will increase the repressive capacity of the state.

EU and European countries and other governments around the world that have diplomatic relations with the Islamic Republic must forge a forceful, coordinated diplomatic response to the state’s atrocities in Iran, including jointly recalling their ambassadors for consultations and summoning Iran’s ambassadors for censure.

The U.S. and its partners should pursue the establishment of an urgent special session at the U.N. Human Rights Council so that governments can collectively address the violence against protesters, and establish an independent mechanism with investigative, reporting, and accountability functions to address the Islamic Republic’s most serious crimes.

The U.S government and its allies should pursue an urgent resolution at the U.N. General Assembly condemning in the strongest terms the atrocities committed by the authorities in Iran against peaceful protesters and calling for the immediate release of any detained protesters.

“The world community must exhaust every avenue to clearly and forcefully communicate to the Islamic Republic—with one voice—that its international isolation will only increase if the state’s violence against the protesters does not cease, as will the political and economic costs,” said Ghaemi.