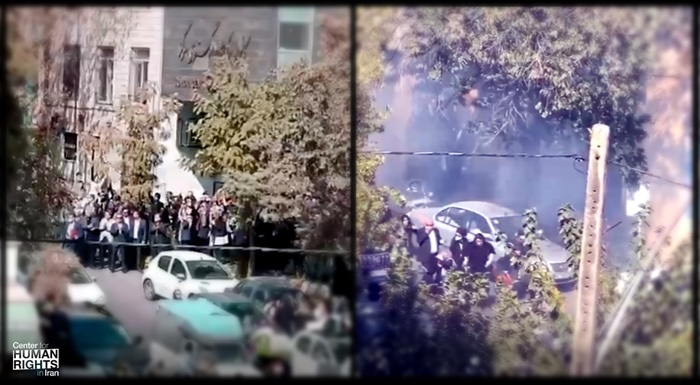 October 12, 2022 – At least three lawyers were among dozens of individuals who were arrested today outside the Iranian Bar Association in Tehran amid anti-state protests that continued in the capital and several cities throughout the nation, the Center for Human Rights in Iran (CHRI) has been informed.

“Lawyers willing to defend detainees arrested for peaceful protest are the last lifeline for a citizenry under attack by the Iranian government,” said Hadi Ghaemi, executive director of the Center for Human Rights in Iran (CHRI).

“International human rights organizations, especially bar associations around the world, as well as government and UN officials, should forcefully condemn the Iranian government’s attack on these lawyers and call on the authorities to immediately release them and all other political detainees,” Ghaemi added. “Protests must be allowed without the threat of lethal state violence or arbitrary arrest.”

An eyewitness informed CHRI that state security forces attacked a peaceful demonstration by lawyers who were expressing solidarity with nationwide protests outside the Iranian Bar Association in Argentina Square in Tehran on October 12 with several rounds of tear gas.

The source, who requested anonymity to protect their security, told CHRI that two white vans without license plates arrested approximately two dozen people and took them to an undisclosed location.

Among those detained were three lawyers who were violently arrested and taken away in separate vehicles: Mohammad Reza Faqihi, Saeed Sheikh, and an unidentified female lawyer.

State security forces also removed cameras outside nearby buildings, the source told CHRI, raising concerns that the authorities would use the footage to identify and arrest other protesters at the event.

Prior to the violent crackdown, the protesters could be heard chanting: “Lawyers support the people! We salute the martyrs!” and “Woman, life, freedom!”

At least four defense attorneys— Mahsa Gholamalizadeh, Saeid Jalilian, Milad Panahipour, and Babak Paknia—were previously arrested in late September. They are among at least 92 members of civil society who have been arbitrarily arrested since September 16, 2022, the day protests erupted throughout the country after, Mahsa Amini, 22, was pronounced dead following her arrest by the morality police.

The government in Iran has taken numerous steps in recent years to deny detainees’ access to internationally recognized standards of due process, including arresting and imprisoning lawyers to prevent them from providing counsel to detainees.

Protests continued in at least 19 cities in Iran today, the fourth week of protests since Amini’s death.

State security forces have been using lethal force to repress protests, particularly in the province of Kurdistan, where a human rights group reported at least five deaths and 400 injuries amid an ongoing state crackdown intended to repress protests there.

Mahsa Amini, her original Kurdish name was Zhina, was from Saqqez, Kurdistan.