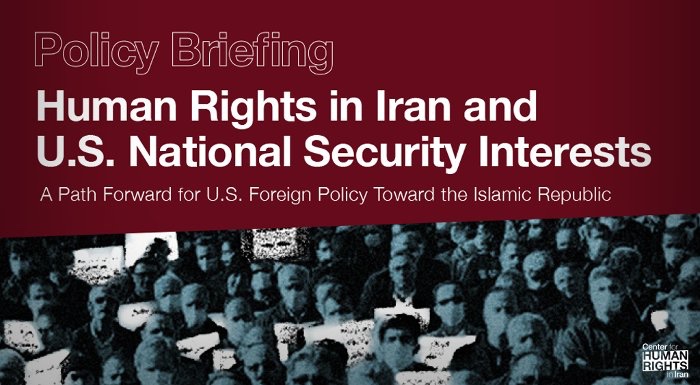 June 14, 2022— President Biden’s silence so far on the killings and mass arrests of protesters in Iran by state security forces over the last month—the latest in a long line of lethal state responses to dissent in Iran—reflects the U.S. government’s low prioritization of human rights in the country, and the continuation of a policy that is harming U.S. national security interests, said the Center for Human Rights in Iran (CHRI) today as it released a new briefing.

“U.S. policies on Iran are hamstrung by the refusal to recognize the Iranian people as the potential key to influencing the Islamic Republic’s policies,” said CHRI Executive Director Hadi Ghaemi.
“The U.S. government cannot hope to influence the Iranian government’s behavior on its nuclear program and other issues while ignoring millions of Iranians who are risking their lives to protest state policies,” Ghaemi added. “If the U.S. government wants progress, it must acknowledge the people who are pushing for it inside Iran.”
The new foreign policy briefing released by CHRI lays out in stark terms the cost to U.S. national security interests of the human rights crisis in Iran. Noting that civil society in Iran largely opposes many of the Islamic Republic’s destabilizing regional policies, the briefing argues that the state’s suppression of civil society facilitates the continuation of those policies.
“Locking up activists is a human rights violation—but it also helps the Islamic Republic continue policies that destabilize the region by silencing voices that oppose those policies,” said Ghaemi.
Download the Briefing
The 29-page briefing, Human Rights in Iran and U.S. National Security Interests: A Path Forward for U.S. Foreign Policy Toward the Islamic Republic, provides specific recommendations for the Biden administration and Congress that would see the U.S. lead a stronger international response to the Islamic Republic’s suppression of civil society, and more effectively recognize and amplify the voices of civil society in Iran. The policy recommendations are grouped into five main areas:
Significantly increased recognition of dissidents in Iran and their issues of concern
Strengthened and more focused global pressure on Iran to release political prisoners
More rigorous and effective defense of peaceful protest in Iran
Strengthened international human rights mechanisms
More effectively employed human rights sanctions
Citing public opinion polls that have found, for example, that 73% of respondents in Iran agree with the statement, “Our enemy is right here, they lie that it’s the USA,” as well as research CHRI has done on civil society in Iran, the briefing argues that civil society rejects many of the Islamic Republic’s foreign policies—but has been unable to mobilize, galvanize broader support, and exert pressure on the government.
The briefing notes the Iranian government is less resistant to policy changes than many believe; when under pressure in the past it has shown notable pragmatism, and it is already worried about rising discontent in the country. More effectively supporting the voices of civil society in Iran could elicit an assessment on the part of the government that at least some policy changes are in its interest.
CHRI argues this is a long-term strategy likely to yield few immediate results; for too long U.S. support for human rights in Iran has been sporadic and peripheral to other concerns. Instead, U.S. foreign policymakers should treat human rights as equal in importance to other policy streams, including those regarding nuclear activities, weapons proliferation and regional security.
“Military options have been widely and correctly rejected, and economic coercion has proven to be of limited effect outside the Islamic Republic’s nuclear activities,” notes Ghaemi.
“The status quo is unstable, with increasing potential for military conflict within the region and with the U.S.,” he added. “Defending the rights and amplifying the voices of civil society in Iran is the most effective way to bring about change in many of Iran’s more adversarial policies.”