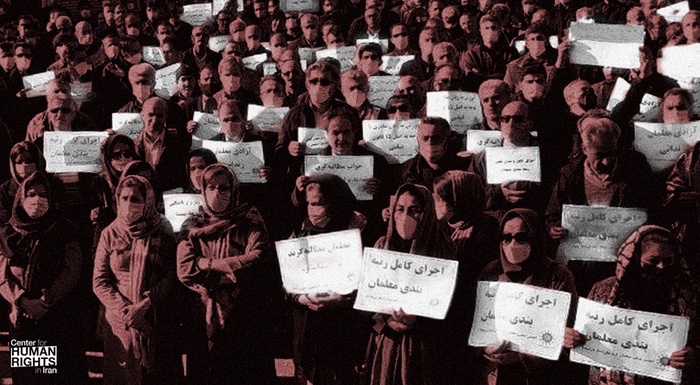 December 13, 2021 – The government of Iran should allow teachers to exercise their right to public protest without the threat of violence or arbitrary arrest, said the Center for Human Rights in Iran (CHRI) in a statement today. Teachers should be allowed to voice their legitimate demands for fair pay and the release of their unlawfully jailed colleagues.Teachers and supporters protested in the streets of 119 Iranian cities across Iran, including thousands in Shiraz, the capital of Fars province in south-central Iran, at least hundreds in the capital of Tehran, and hundreds in Yasouj, the capital of Kohkiluyeh and Boyer-Ahmad Province, on December 13, 2021, the third day of protests.

“Teachers are a bedrock of society, yet the Iranian government ignores their needs and violently suppresses their protests, while security forces are allowed to throw them into prison under false charges at will,” said CHRI Executive Director Hadi Ghaemi.

“The government’s priorities are clear,” said Ghaemi, “Iran’s teachers lack the resources they need to educate students, while the military and state TV budgets are significantly increased.”

As one of the most organized labor sectors in the country, teachers have been holding large protest gatherings for years voicing demands that include:

The release of jailed labor leaders

Ending discrimination within the education system

Curbing the privatization of education and keeping schools free

The repair of dilapidated school buildings

President Ebrahim Raisi submitted this year’s budget proposal to Parliament on December 12, according to the state-run Aftab News, with a 240 percent increase to the budget of the Islamic Revolutionary Guards Corps at 93 trillion tomans (22.14 billion USD), and a 56 percent increase for the state media outlet, the Islamic Republic of Iran Broadcasting, at 5.3 trillion tomans (1.25 billion USD).

Yet other government workers including teachers were only given a 10 percent average increase.

The Iranian Teachers Trade Unions Coordination Council said “neither the government nor Parliament have shown any attention to our demands,” in a statement released on December 13 on its Telegram app channel.

“Instead, they have announced a shrunken budget for the year 1401 (March 2022-2023) …. In the (proposed) budget, allocations to military and unaccountable institutions have increased manyfold while the livelihood of most people, namely teachers, have been ignored,” said the statement.

The financial hardship of teachers and retired educators has intensified due to the economic fallout caused by the pandemic and inflation, which soared to 45 percent in September 2021, the highest level since 1994, according to the Associated Press, while food prices skyrocketed by nearly 60 percent.

In one of his first decisions after being elected president in June 2021, President Raisi blocked an increase in teachers’ salaries that had been approved by the previous government.

In response, large groups of teachers gathered in front of Parliament on September 5, 2021, chanting that “the poverty line is 12 million tomans [approximately 2,803 USD at the time], our salary is 3 million tomans [708 USD].”

Dozens of peaceful teachers’ rights advocates are currently imprisoned in Iran on manufactured charges that reflect the criminalization in Iran of dissent, peaceful protests and assembly, and independent labor activism.

Between 2014 and 2019, at least four teachers were given the death sentence for alleged activities against the state, and three of them were executed: ethnic Arabs Hadi Rashedi and Hashem Shabaninejad and Kurdish activist Farzad Kamangar.

Prominent teachers rights activists including Esmail Abdi, Hashem Khastar, Rasoul Bodaghi, Mahmoud Beheshti Langroudi, and Ali Akbar Baghani are among those who have all served or been given long prison sentences for their peaceful struggles to defend the rights of their colleagues.