No Accountability for Hundreds Killed, Thousands Injured and Arrested

November 10, 2021 IranSOS Human Rights Comments Off on No Accountability for Hundreds Killed, Thousands Injured and Arrested 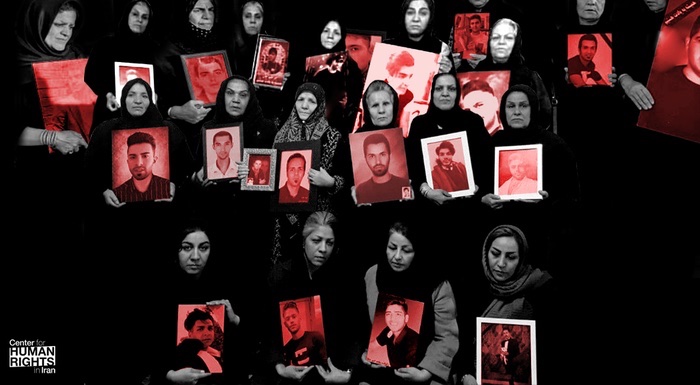 International Community Must Demand Independent Investigation and Justice for Victims

2021-11-10-Two years after Iran’s security forces violently crushed mass protests that erupted across the country, leaving hundreds of civilians killed, two officials who oversaw that repression and have committed egregious rights violations for decades—President Ebrahim Raisi and Judiciary Chief Gholam-Hossein Mohseni-Eje’i—have risen to top positions of power in Iran.“Two years ago, Iranian men and women of all ages and classes risked their lives by gathering in the streets of their country to demand change and accountability,” said Executive Director of the Center for Human Rights in Iran (CHRI) Hadi Ghaemi.

“In response, the Iranian government slaughtered them with the comfort that the international community would fall silent and soon turn its attention elsewhere,” Ghaemi added.

At least 304 people, including at least 23 children, were confirmed killed, according to Amnesty International, and Reuters has reported deaths as high as 1,500. Thousands were also arrested and injured at the protests, which broke out in hundreds of Iranian cities on November 15, 2019, in response to rising gasoline prices before quickly evolving into broader demonstrations against state policies and repression.

“The scale and brutality of the 2019 massacre of protesters are unprecedented in contemporary Iranian history,” said Ghaemi. “It will go down in history as one of the darkest chapters of the Islamic Republic and it should never be forgotten.”

No Iranian official has been prosecuted for the killings. Instead, officials responsible for the massacre were promoted and the government has given many of the families of murdered protesters and bystanders so-called “blood money” in return for their silence.

Individuals and family members who have tried to seek justice have been harassed by intelligence agents, threatened with arrest, and blocked from mourning their loved ones.

CHRI calls on the international community to demand a thorough and independent investigation into the killings of November 2019 and to demand similar accountability for other egregious and unaddressed human rights violations in Iran, including the 1988 extrajudicial executions of thousands of political prisoners.

Specifically, the UN Human Rights Council should establish an independent investigatory and accountability mechanism to collect and analyze evidence of these and other serious crimes committed by the authorities of the Islamic Republic.

CHRI also calls on those countries currently negotiating with Iran to question their Iranian counterparts about these events, publicly condemn Iran’s ongoing repression of civil society, forcefully call for the release of all individuals imprisoned for the peaceful expression of dissent or belief, and demand that the hundreds of families of those killed be allowed to freely mourn and seek justice.

“The Iranian leadership has demonstrated it will not allow accountability for unlawful state actions; it is up to the international community to avoid distraction and expediency and defend the rights of people of Iran,” Ghaemi said.

As stressed by the UN special rapporteur on Iran, “without the involvement of the international community, such grave violations will continue.”

Ebrahim Raisi, who became president in August 2021 after an election in which all credible challengers were disqualified and which saw the lowest voter turnout in the Islamic Republic’s history, was judiciary chief during the November 2019 protests and oversaw the prison and judicial system as it flooded with thousands of protesters.

Speaking at the Supreme Judicial Council on November 25, 2019, Raisi responded to the protests by stating, “We must seriously pursue leads to the saboteurs, anarchists and foreign [intelligence] services in these kinds of incidents.”

As judiciary chief, Raisi not only allowed security agencies to engage in the mass shootings of protesters with impunity, he pursued the executions of juvenile offenders, the imprisonment of activists, human rights lawyers, and religious and ethnic minorities, and the detainment of dual and foreign nationals to use as bargaining chips with other countries.

Most notoriously, as a prosecutor in 1988, Raisi sat on a “death commission” that sent thousands of political prisoners who had already been tried and were serving their prison sentences to be executed extrajudicially after inquisition-style questionings about their beliefs.

Current judiciary chief Gholam-Hossein Mohseni-Eje’i was the judiciary’s representative in the Intelligence Ministry from 1985 to 1988, when thousands of activists were arrested and extra judicially executed. Later, as minister of intelligence from 2005-2009, he spearheaded the campaign to force dissidents to make televised false “confessions” that were typically extracted under torture.

In 2009, when Raisi and Eje’i were appointed to a committee to investigate numerous reports of torture and sexual assault against protesters arrested during the mass demonstrations of that year, both men brushed aside overwhelming evidence and dismissed the allegations.

“There is a crisis of impunity in the Islamic Republic, where serious crimes and egregious rights violations are not punished but rather rewarded,” said Ghaemi.

“If the international community does not speak out forcefully and with one voice against these abuses, the violent crushing of dissent in Iran will only continue,” he added.