At Least Three Shot Dead Less Than a Week into Demonstrations Against Water, Power Shortages

July 19, 2021 IranSOS Human Rights Comments Off on At Least Three Shot Dead Less Than a Week into Demonstrations Against Water, Power Shortages 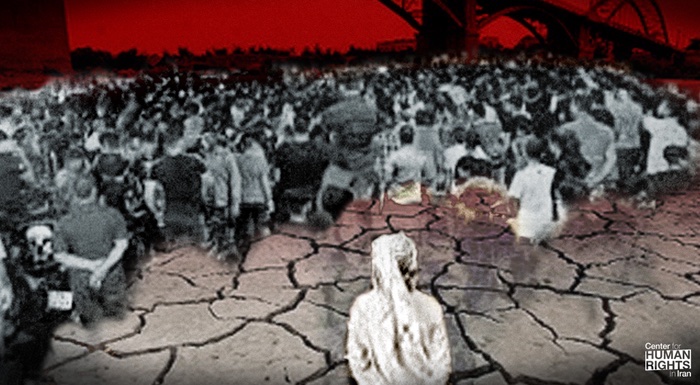 July 19, 2021—The unlawful killings of protesters by state security forces in Iran’s drought-ridden Khuzestan Province should be condemned by the UN and international community to prevent further loss of life from excessive and unlawful state force, the Center for Human Rights in Iran (CHRI) said in a statement today.“Iranians are desperately calling for water and electricity and are being answered with gunfire and state security thugs on motorcycles,” said CHRI Executive Director Hadi Ghaemi.

“The UN should forcefully call upon Iranian authorities to allow people to air their grievances without threats of violence or imprisonment, in order to prevent a repeat of the events of 2019, when demonstrators were slaughtered by the hundreds,” he said.

While the Iranian Constitution ostensibly allows peaceful protests and marches to be held, Iranian security forces have a documented history of violently suppressing protests with indiscriminate and live fire and by conducting arbitrary arrests.

Provincial officials have confirmed the deaths of at least three protesters as of July 17, one day after protests erupted throughout the province over nationwide water and power shortages that have hit Khuzestan Province particularly hard amid a debilitating heat wave.

Iran is facing its worst drought in 50 years. The government’s chronic economic and environmental mismanagement and corruption have greatly worsened the crisis. Protests have occurred in several cities throughout Khuzestan Province, including the capital Ahvaz, and the cities of Shush, Sousangerd, Shadegan, Koutabdollah, Katkheh, Hamidiyeh, Shawvar, and, Seyyed-Naim.

More than 130 documentary filmmakers in Iran expressed solidarity with the protesters on July 19, noting that they have “always reflected the struggles and demands of the people and today we stand by the thirsty people of Khuzestan and condemn the suppression [of their protests] for seeking water and greener pastures.”

“Access to water and electricity is a necessity and the ability to protest without the threat of death is a basic right that should be protected by the Iranian government, not trampled upon,” said Ghaemi.