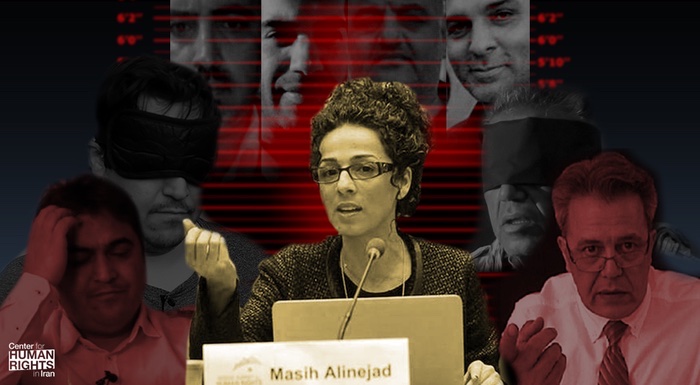 July 14, 2021 – The Center for Human Rights in Iran (CHRI) today condemned in the strongest terms a foiled attempt by Iranian state agents to kidnap Iranian-American activist Masih Alinejad from U.S. soil, and urged the American and European governments to urgently pursue policies that address Iran’s kidnappings and increasingly unlawful and violent behavior.“This shameful kidnapping attempt was not an isolated incident; it stems from the Iranian authorities’ unbridled campaign to stamp out any peaceful dissent by Iranians inside or outside the country who dare to criticize state policies,” said CHRI Executive Director Hadi Ghaemi.

“Iranians will continue to be targeted by state agents if the international community—particularly countries Iran is currently negotiating with such as the U.S. and in Europe—does not address Iran’s worsening human rights record through sustained, comprehensive policies,” Ghaemi added.

The plan to abduct Alinejad was part of a wider state campaign against several Iranian dissidents living abroad, including in Canada and the UK, that was orchestrated by four Iranian nationals who have been charged with conspiracy to kidnap, according to an indictment unsealed July 13, 2021, in Manhattan Federal Court.

“The attempted abduction of Masih Alinejad on American soil shows that if [Iran’s] security apparatus cannot achieve its goal through the judiciary, or threats, or through the arrest and conviction of [Alinejad’s brother] Alireza Alinejad, it sees no need to remain behind the curtain to hide its role or feel any obstacle in committing abductions or any other crime,” tweeted Iranian human rights lawyer Saeid Dehghan.

CHRI urges all governments whose nationals are currently detained in Iran to urgently secure their release, including German national Jamshid Sharmahd, who was abducted by Iranian state agents in Dubai in August 2020 and remains detained in the country in poor health and without access to counsel.

Dissidents Unsafe Inside and Outside Iran

For decades, Iranians inside and outside the country, including activists, dissidents and journalists, have been persecuted and terrorized by Iranian state agents through various methods for criticizing state policies—and the recent kidnapping attempt against Alinejad is evidence that the campaign against those abroad is again heating up.

Most recently, the dissident Ruhollah Zam was abducted by Iranian state agents during a trip to Iraq from his home in France, and unjustly executed in Iran in December 2020. His death followed France’s refusal to strongly pursue his release, despite Zam holding a residence permit in France as a refugee.

Iranian-born German national Jamshid Sharmahd was abducted by Iranian state agents during a flight stopover in Dubai and taken to Iran where he has been detained at a location that remains undisclosed to his family, and where he is being held without access to a lawyer of his choice while his health deteriorates.

In June 2021, the BBC urged the UN Human Rights Council to “safeguard” Iranian-born employees and workers residing abroad, who have been harassed and intimidated by Iranian state agents; some BBC Persian workers said they had been threatened with being kidnapped from London and taken to Iran by intelligence agents.

Since the 1980s, Iranian dissidents have been assassinated abroad, including former Iranian Prime Minister Shapur Bakhtiar in France, and singer Fereydoun Farrokhzad in Germany. Four Iranian Kurdish politicians were assassinated at a restaurant in Germany in 1992.

CHRI urges the UN to create a comprehensive report on these kidnappings and assassinations and submit it to the UN Human Rights Council.

“Addressing the Iranian government’s recklessly violent and unlawful activities should be a top priority for international negotiators as they work to secure a nuclear deal with Iran,” said Ghaemi.

“All Iranians have a right to express themselves without fear of persecution or death—yet the Iranian government is trying to crush this right not only inside Iran but extra-territorially as well.

“This foiled kidnapping attempt should raise a red flag for U.S. and European governments—policies and precautions need to be formulated to address the fact that Iranian dissidents, wherever they reside, are at risk because of the Islamic Republic’s disregard for law and life,” Ghaemi said.