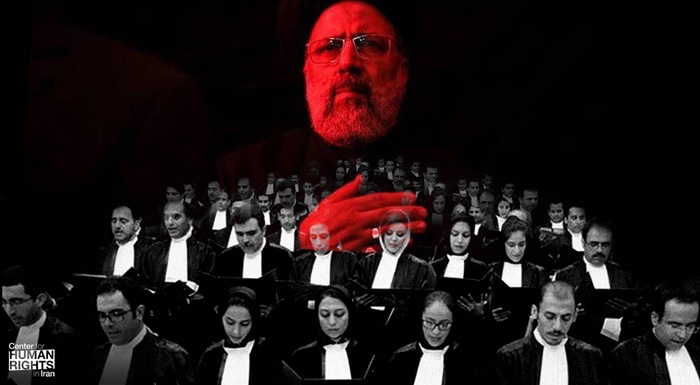 July 12, 2021—In a sweeping grab of new powers over the Iranian Bar Association (IBA) that grants the Iranian judiciary the right to issue and revoke law licenses, the country’s judicial establishment, now led by human rights violator Gholam-Hossein Mohseni Ejei, has effectively destroyed the independence of Iranian lawyers.

The new regulations, which render meaningless the right to due process and a fair trial, should be strongly condemned by lawyers, human rights groups, and the international community, the Center for Human Rights in Iran (CHRI) said in a statement today.

“The ongoing state policy of undermining Iran’s independent bar association and its lawyers is eliminating the right to due process when Iranians need it the most,” said Hadi Ghaemi, executive director of the Center for Human Rights in Iran.

“Human rights lawyers are a lifeline for citizens relentlessly and unlawfully targeted by the state, and the Iranian government expects the world to look the other way while it cuts this lifeline,” said Ghaemi.

Iran’s newly appointed judiciary chief, former intelligence minister and cleric Gholam-Hossein Mohseni Ejei has the authority to ratify and issue certain regulations without parliamentary approval. Yet he does not have the authority to issue regulations concerning the legal profession. According to the Law on the Independence of Bars Associations, only the Bar Association has this authority.

Nevertheless, the Regulations for the Enforcement of the Law on the Independence of the Bar Association were approved in the final days of the term of the previous judiciary chief, Ebrahim Raisi (who was elected president on June 18, 2021, in an engineered election controlled by the hardline ruling clerical establishment), and ratified by the judiciary on June 23, 2021.

The ratifications are the latest step in a decades-long campaign against independent lawyers in Iran, primarily aimed at eliminating fair standards of due process for individuals accused of criticizing state policies.

“These regulations were designed to normalize the state’s ongoing campaign against Iran’s bar association and make it extremely costly and dangerous for lawyers to defend political prisoners,” said Ghaemi.

The regulations also enable the judiciary chief to determine how lawyers should be trained and make it easier for state security forces to monitor lawyers.

Lawyers in Iran: Legal Profession Has “Lost Its Last Shreds of Independence”

The National Union of Iranian Bar Associations issued a statement on July 3, 2021, describing the regulations as “unenforceable” and in violation of “Article 22 of the Law on the Independence of the Bar Associations” as well as in disregard of “the opinions of bar associations throughout the country on how to conduct interactions with the judiciary.”

Two days later the Council of Iranian Lawyers Organizations also condemned the regulations in a statement adding that “The regulations lack legal foundations as the judiciary has no authority in drafting and publishing them and they have inherent flaws that violate the Law on the Independence of the Bar Associations.”

Reacting to the judiciary’s new regulations, Nasser Zarafshan, a human rights lawyer in Iran, said the legal profession in Iran has “lost its last shreds of independence.”

“It appears the judiciary wants lawyers to be like servants carrying out office work,” he added in an interview with Emtedad newspaper on July 6. “They don’t want lawyers to be independent-minded and courageous.”

The former vice president of the IBA in Tehran, Shapour Manouchehri, meanwhile stated that the regulations “are in violation of Article 22 of the Law on the Independence of the Bar Associations, particularly in regards to the judiciary being the source and ratifier… and open the path to interfere in the IBA.”

Despite the objections of the legal community, on July 5 the Administrative Court of Justice declared the regulations lawful and subsequently the judiciary informed all bar associations across the country that they will be enforced.

Lawyers Continue to Be Imprisoned for Doing Their Jobs

“President-elect Raisi hasn’t even started his term yet and already we’re seeing Iranian civil society being further strangulated while defense lawyers are imprisoned for doing their jobs,” Ghaemi said.

“Human rights lawyers are paying with their freedom to try to provide due process within a system that is trying to destroy it,” he added. “Now more than ever they need the international community to speak up for them.”

There are numerous human rights lawyers currently imprisoned in Iran, convicted on manufactured charges after unfair trials for defending clients, the law, and basic civil and political rights in Iran.

Read this press release in Persian