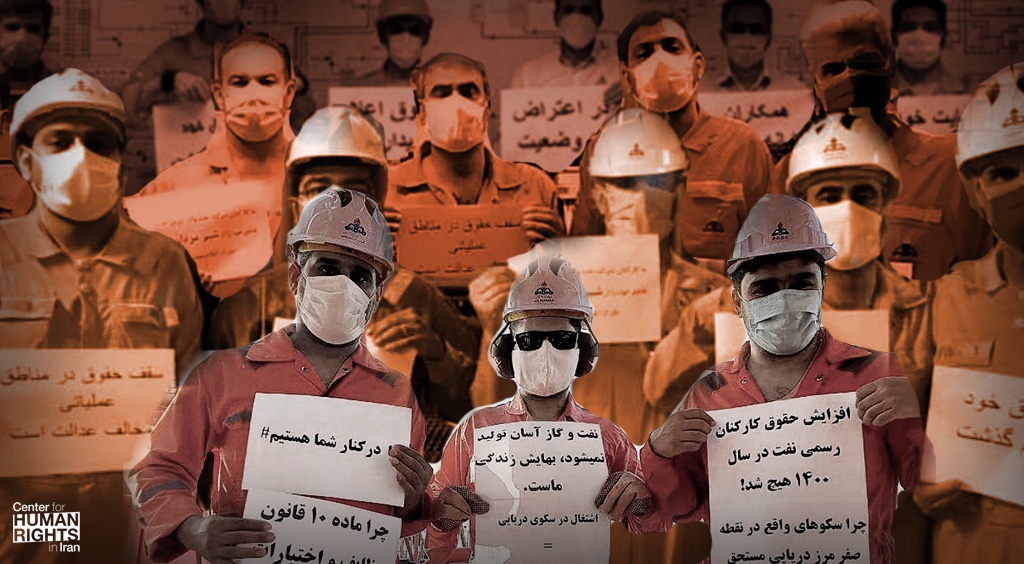 June 29, 2021—The continuation of strikes in Iran’s critical oil and petrochemical facilities—not seen on this scale for more than four decades—and the massive show of support from workers in other sectors, may well be a turning point in the history of Iran’s labor protests.“The Islamic Republic’s response to peaceful public protest has been violent, lethal suppression, and the potential for deadly state violence against the strikers if these work stoppages continue and grow is real,” said Hadi Ghaemi, executive director of the Center for Human Rights in Iran (CHRI).

“The international community must be especially vigilant in responding quickly and forcefully to any outbreak of state violence,” Ghaemi added, “and let the authorities in Iran know the world will not turn a blind eye to such events.”

CHRI calls on the Iranian authorities to respect workers’ internationally recognized right to strike, and to heed the voices of the workers who are demanding other basic rights such as payment of fair wages and safe workplace conditions.

The importance of the oil industry as a major source of Iran’s foreign currency and the workers’ decision to go on strike rather than hold protests, has increased the potential for a confrontation with the state.

This is especially so given that the incoming President Ebrahim Raisi, elected on June 18, is a hardline cleric who as Iran’s judiciary chief oversaw the violent suppression of protesters during the November 2019 nationwide protests in Iran, and who has a record of egregious human rights violations spanning decades.

The ongoing strikes by a growing number of temporary contract workers in other sectors of Iran’s economy, as well as the common demands they share with other workers such as teachers and retirees who have held protest gatherings in numerous cities in recent months, have set the stage for protesters in all sectors to merge.

The widespread nature of the strikes has so far made it impossible for the authorities to suppress them with brutal force as they have in the past. However, in an attempt to minimize the crisis, the country’s tightly-controlled media outlets have dedicated very little coverage of the recent labor developments.

The temporary contract workers in oil and petrochemical firms are demanding higher pay to keep pace with Iran’s high inflation rate, and they are also unhappy about conditions at the workplace, which lack basic health and safety measures despite Iran’s high COVID-19 infection rate.

The increasing involvement of the private sector in the oil contracting business in Iran has led to a significant growth in the number of temporary workers who, according to some experts, currently make up about 70 percent of the oil industry workforce, although there are no official figures to show their exact size.

The contractors widely ignore laws and regulations on wages owed to temporary workers who are hired for the duration of a project and are made to sign contracts that deny them the vast majority of rights guaranteed under Iran’s labor laws.

With the passage of more than a week since the start of the oil industry strikes, tens of labor unions, federations and organizations around the world have expressed their solidarity with statements and declarations of support, including those in Brazil, Spain, France, Burkinafaso, Indonesia, Algeria, Haiti, Senegal, Pakistan, Turkey, El Salvador and Iraq.

“The issues facing the oil industry’s workers are the same as those facing all workers in Iran; the authorities should begin addressing their urgent needs and basic economic rights, rather than threatening, expelling and suppressing them,” Ghaemi said.