For Iran’s Lawyers, Defending Dissidents Is Getting Dangerous

May 19, 2021 IranSOS Human Rights Comments Off on For Iran’s Lawyers, Defending Dissidents Is Getting Dangerous 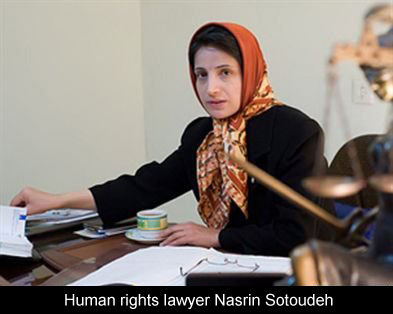 Tuesday, May 18, 2021 – WPR – In 1985, my parents were taken to court in Tehran by a tenant who was trying to stop them from selling a property he was renting from them at the time. My parents were surprised to learn about the lawsuit. After all, they had given the tenant several months to vacate. He had no legitimate legal argument.

On the day of the hearing, when it was the tenant’s turn to present his case, he pointed at my parents and shrilly declared that they were communists. For a moment, the room fell silent. Then my parents’ lawyer calmly closed his legal files and, without making eye contact with anyone, walked out of the courtroom.

To understand his reaction requires some context. This was six years after Iran’s 1979 revolution, which had ousted the ruling monarchy of Shah Mohamed Reza Pahlavi. Though the revolution is now almost exclusively known for having turned Iran into an Islamic theocracy, communists were among several leftist factions that had joined forces with Islamists in support of it. But by 1985, the state, now dominated by Muslim clerics, had aggressively moved to purge all these other groups. Many communists had already been jailed, at times based on nothing more than allegations like the one made against my parents by their tenant. Their lawyer left the courtroom that day because he feared he, too, would end up in the state’s crosshairs if he defended people tainted by even an accusation of being communist.

Luckily for my parents, the presiding judge could tell that the renter’s accusation was spurious. He rescheduled the hearing, and another lawyer helped my parents get the baseless lawsuit thrown out. Though the story is now a source of amusement for my family, it highlights the dangers that Iranians accused of political opposition to the state, but also the lawyers that represent them, still face today, 36 years later. Those who speak out against the government risk severe persecution, including lengthy prison terms and even execution. And the attorneys who defend them regularly face serious threats to their jobs and personal safety—so much so that today, Iran is experiencing a dearth of human rights lawyers.

“During the Green Movement protests in 2009, there were more than 50 lawyers who took on human rights cases,” said Saeid Dehghan, an Iranian defense attorney, referring to the millions-strong protests that sprung up to oppose the contested reelection of then-President Mahmoud Ahmadinejad. “But so many of them were arrested, threatened and imprisoned that some decided to leave the country. Some were disbarred, and some just could not take all the pressure and gave up.”

“Currently,” he added in an email interview, “there are very few lawyers involved in cases about human rights or civil society activities in Iran…”

*Jasmin Ramsey is an Iranian-born journalist based in Washington, D.C. She has been writing about Iran and U.S. policies in the Middle East for more than a decade, and now serves as the communications director of the Center for Human Rights in Iran. Follow her on Twitter @jasminramsey