Baha’i in Iran — repressed and persecuted by the state

March 9, 2021 IranSOS Human Rights Comments Off on Baha’i in Iran — repressed and persecuted by the state 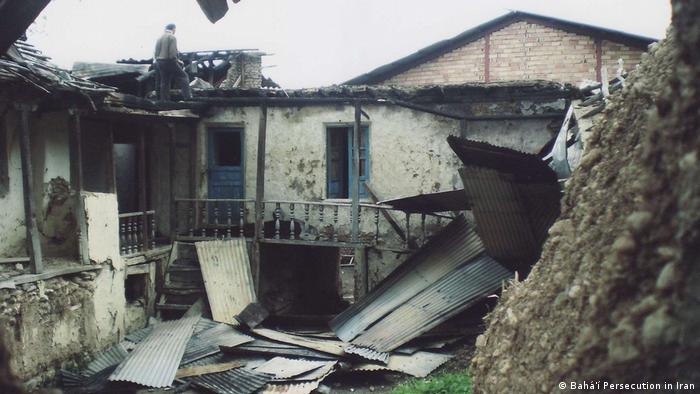 08.03.2021-DW- It’s no secret that the Baha’i community in Iran faces far-reaching oppression. Now, DW has gained access to a policy paper that appears to show the extent to which the repression is state-sponsored.The two-page document is potentially explosive. Experts believe it shows the minutes taken during a meeting on September 21 of last year in the northern Iranian city of Sari. During the gathering, senior officials from a number of provincial authorities agreed to pursue a systematic policy of persecution against Iran’s largest non-Muslim religious minority: the Baha’is.

The Baha’i faith emerged from Islam in the middle of the 19th century. Today it has some five million members worldwide.

But responding to a written enquiry from DW, the German government’s human rights commissioner, Bärbel Kofler, said that in their Iranian homeland the Baha’is are, “the worst treated minority in terms of their human and political rights. They’re viewed as a sectarian political group and persecuted accordingly.”

At the mercy of the state

And that persecution appears to be nothing less than official government policy. That, at least, is the conclusion that appears to emerge from the paper leaked to DW. 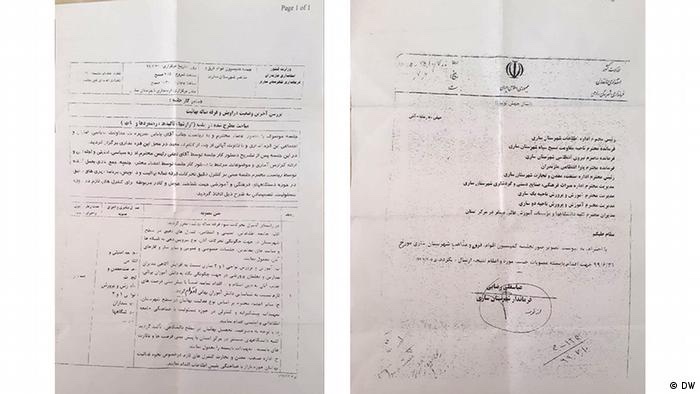 According the document, 19 representatives of key Iranian agencies, including the intelligence services and the police, as well as state authorities responsible for business, commerce and education, gathered in the northern province of Mazandaran for a meeting of the so-called Commission for Ethnic Groups, Sects and Religions. The stated aim: “To gain control over the misguided movement of the perverse Baha’i sect.”

The Iranian embassy in Berlin has not responded to an official enquiry by DW concerning the persecution of the Baha’is.

DW has shared the document with the London-based Minority Rights Group (MRG), which is also active in Iran. MRG Executive Director Joshua Castellino says the notes from the meeting are shocking: “It suggests that a concerted strategy has been put in place, in which a government authority gives orders to a whole range of other agencies concerning the persecution of the Baha’i community.”

Wolfgang Kaleck from ECCHR, the European Center for Constitutional and Human Rights in Berlin, who also had access to the document, points out that a number of different UN agencies are looking into the massive discrimination against the Baha’is. According to Kaleck, Iran usually sidesteps allegations, “pointing instead to ‘various tendencies and groupings in Iranian society’ who find the Baha’i offensive.”

“But now, this new document appears to show that at the provincial level, at least, far-reaching instructions have been issued on how to enforce the exclusion of Baha’is from public life,” he said.

One example of what that means on the ground takes us to the village of Ivel in Mazandaran Province. In many ways, Ivel is a village just like any other. The difference is, however, that it is home to one of the oldest Baha’i communities in Iran. That is, it was home to them until they were driven out of Ivel, their houses destroyed, their land and fields confiscated.

The expulsion began in 1983, just a few years after the Islamic Revolution. Trucks and bulldozers moved in. Fifty houses were destroyed. And, just a few months ago, the land grabs were declared legal by the courts — shortly after the now-documented meeting in the provincial capital of Sari.

In late February, the Baha’i took to social media, using the hashtag #ItsTheirLand, to draw attention to the confiscation of their land and property. The protest had a global echo. 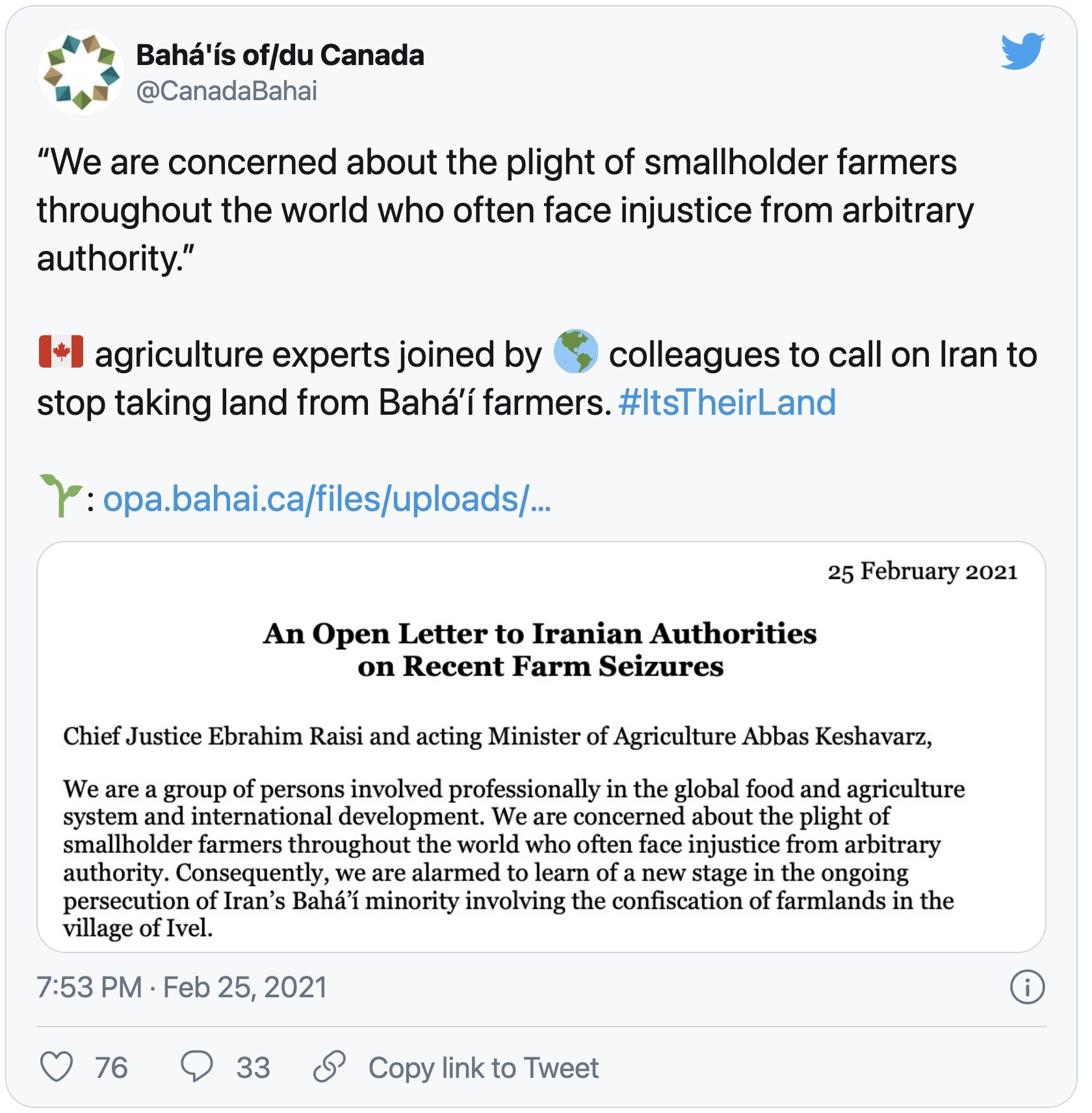 Human Rights Commissioner Kofler believes that the COVID-19 pandemic has only served to “aggravate still further the political, economic and social discrimination of Baha’is.” The German government’s second Report on International Religious Freedom, published last October, said that the estimated 300,000 members of Iran’s Baha’i community “are collectively dismissed as ‘heretics’ and charged with being a threat to the state.”

Repression beyond the grave

Baha’is have also been executed, particularly during the first years of the Islamic Republic, philosophy professor Heiner Bielefeldt told DW. From 2010 to 2016, he was a UN Special Rapporteur on Freedom of Religion or Belief with a specific focus on the Baha’i community. He concluded that the persecution of Baha’is extended to all areas of their existence: “And it even continues after their death, including the deliberate destruction of cemeteries using steam rollers. This was not a case of individuals daubing graffiti on gravestones. This was about razing whole cemeteries to the ground.”

Bielefeldt describes, “systematic, state-sponsored persecution in all areas of life,” with the objective of, “uprooting and eradicating the Baha’i faith.” 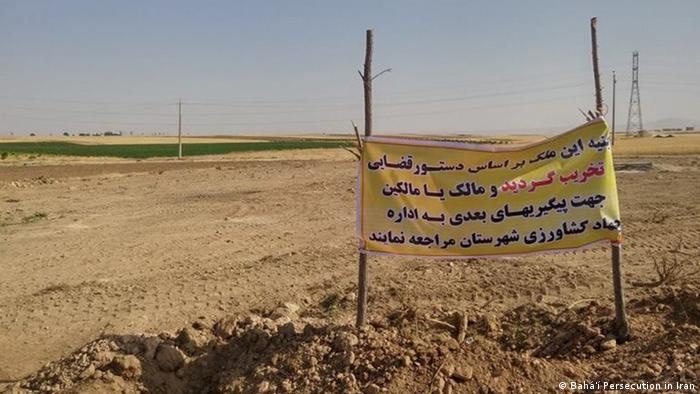 He does, however, point out that his observations show that, “there are those in Iranian society who do not go along with the official line. What we’re seeing is very harsh repression carried out by state authorities that does not, however, necessarily go hand in hand with social repression.” That is a reference to the fact that individual Shiite clerics — such as Hassan Yousefi Eshkevari, who is currently living in exile in Germany — have given their backing to the protests against the land grabs in Ivel.

At the same time, Bielefeldt says that although the Baha’i people are under such acute pressure themselves, they not only campaign for their own rights but also for those of others. One session of the UN Human Rights Council clearly left a deep impression: “What happened was that the Baha’i representative in Geneva spoke out on behalf of persecuted Shiite minorities in Saudi Arabia and parts of Southeast Asia.”

Iran, with its large Shiite majority, was not happy, as Kofler explained: “Iran flouts the right to religious freedom, which Teheran itself pledged to defend when it signed the UN International Covenant on Civil and Political Rights.”

That was back in 1975, four years before the revolution. Iran’s present-day constitution does not, however, recognize the right to religious freedom. Alongside Shiite Islam, it lists a number of tolerated minorities. Among them: Christianity. And Judaism. But not the Baha’i faith.