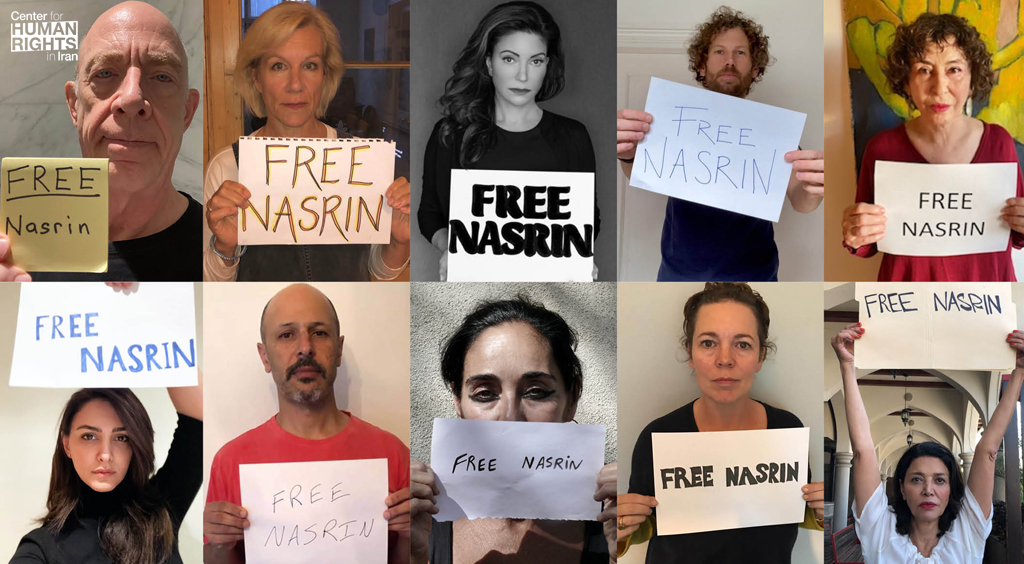 September 9, 2020—Prominent global artists and authors have united in an impassioned call to free the renowned human rights lawyer Nasrin Sotoudeh, who is imprisoned in Iran for her defense of civil and political liberties.Joining the campaign to free Sotoudeh and the many other political prisoners in Iran are Olivia Colman, J.K. Simmons, Shohreh Aghdashloo, Juliet Stevenson, Nazanin Boniadi, Shirin Neshat, Nina Ansary, Azar Nafisi, Maz Jobrani and Simon Rix.

“We call on people across the world to join us in this grassroots online protest to #FreeNasrin and post their pictures of solidarity on their social media platforms,” the group said in a joint statement.

“I’m proud to stand with Nasrin and call for her release as she risks everything to stand for dignity and justice in Iran,” added the Oscar-winning actress Colman, who narrated the upcoming documentary, Nasrin, about the prominent human rights attorney.

“Nasrin Sotoudeh has sacrificed her freedom and years without her husband and two children to defend the human rights of others. We must all join together to demand her release,” said Hadi Ghaemi, executive director of the New York-based Center for Human Rights in Iran (CHRI).

Nasrin, who is currently serving a 38-year sentence at Iran’s notorious Evan Prison for her work as a human rights attorney, is currently into the fourth week of a hunger strike to call attention to political prisoners in Iran who are not only behind bars unjustly, but who are also at grave risk of contracting COVID-19 in Iran’s overcrowded and unhygienic prisons.

Numerous political prisoners in Iran have tested positive for COVID-19. Only a fraction have been tested and almost none have received proper medical care. Iran’s political prisoners were largely left out of the country’s March 2020 mass release of prisoners, which was aimed at stemming the mounting deaths from COVID-19 in Iran.

Nasrin will be eligible for parole only after serving 12 years of her sentence. Among her charges were “encouraging prostitution” for advocating against compulsory hijab and defending citizens’ right to peaceful dissent.

She was also the recipient in 2012 of the European Union’s prestigious Sakharov Prize for Freedom of Thought for her human rights work.

Many lawyers are imprisoned in Iran, simply for defending political prisoners and basic civil rights and liberties—including rights that are supposedly protected under Iranian law.

In addition to participating in the online campaign, citizens worldwide are encouraged to ask their elected representatives to demand in bilateral and multilateral forums that Iranian officials free Sotoudeh and other political prisoners and cease jailing people for peaceful dissent.