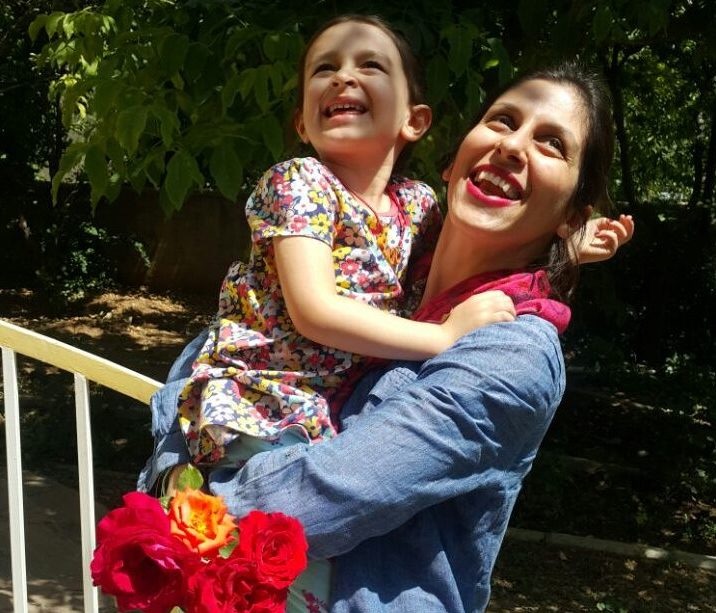 Nazanin Zaghari-Ratcliffe has been temporarily released from prison in Iran because of the coronavirus outbreak, her husband says.

17 March 2020 – BBC – The British-Iranian charity worker will be required to wear an ankle tag and remain within 300m (984ft) of her parents’ home in Tehran.

“The issue now is to make it permanent,” her husband Richard Ratcliffe said.

He added: “It is hard to relax just yet.”

Iran has temporarily released tens of thousands of prisoners in recent weeks in an effort to stop the spread of coronavirus.

On Tuesday, it said it had released about 85,000 prisoners who had tested negative for the virus and had posted bail.

There had been reports that Ms Zaghari-Ratcliffe would be released earlier this month, but she was kept in detention.

The 41-year-old from London was jailed for five years in 2016 after being convicted of espionage charges that she has always denied. The UK has also insisted she is innocent.

She was arrested at Tehran airport after visiting her family on holiday. She insists the visit was to introduce her daughter Gabriella to her relatives.

What has the reaction been?

“I am relieved that Mrs Zaghari-Ratcliffe was today temporarily released into the care of her family in Iran,” Foreign Secretary Dominic Raab said in a statement on Tuesday.

“We urge the regime to ensure she receives any necessary medical care,” he added.

“My feelings today have been all of a mix – pleased at the happiness for Nazanin and Gabriella, but fear this is a new drawn out game of chess,” Mr Ratcliffe said.

“It is one feeling to walk out of prison. It is completely different to walk back in. No-one should be asked to go and be a hostage again. So we are watching carefully,” he said.

In a statement released through the Free Nazanin campaign, Ms Zaghari-Ratcliffe said she was “so happy to be out”.

“Even with the ankle tag, I am so happy,” she said. “Being out is so much better than being in – if you knew what hell this place is. It is mental. Let us hope it will be the beginning of coming home.”

Earlier this year, Mr Ratcliffe urged Prime Minister Boris Johnson to be tougher with Iran. He said there had been “no breakthrough” in efforts to secure her permanent release.

Mr Johnson has previously said he would leave “no stone unturned” to help free Ms Zaghari-Ratcliffe.

The charity worker remains on medication for depression and on beta blockers – medicines which slow down the heart – for the panic attacks she’s been suffering in jail, her husband said at the time.

Her family and the UK government has always maintained her innocence and she has been given diplomatic protection by the Foreign Office – meaning the case is treated as a formal, legal dispute between Britain and Iran.

While he was foreign secretary, Mr Johnson mistakenly said that Mrs Zaghari-Ratcliffe had been in Iran training journalists when she was arrested.

She has always maintained she was in Iran visiting relatives.