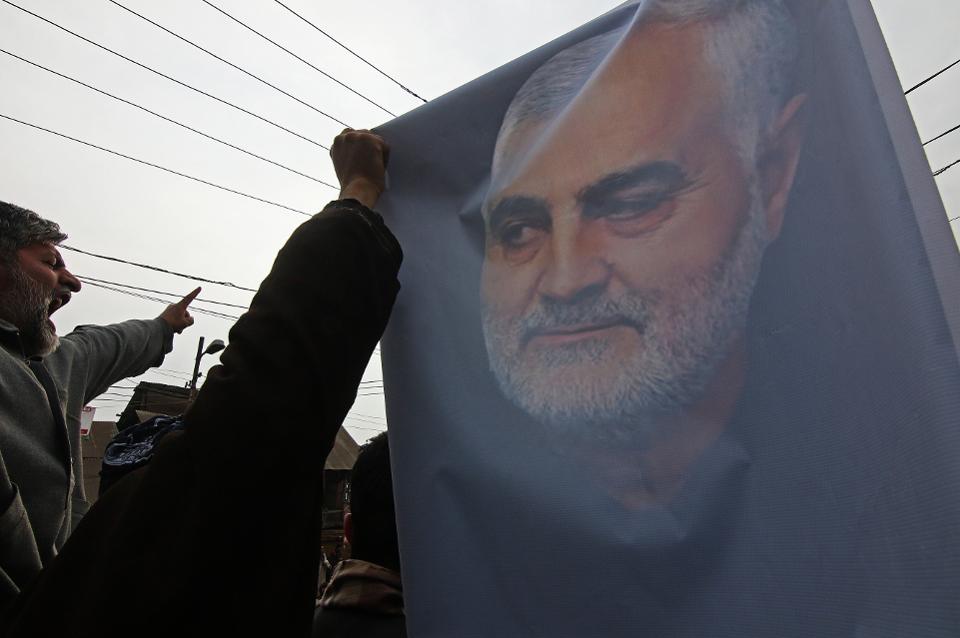 As much as anyone, it was Soleimani who embodied the Iranian drive to create a “Shi’a Crescent” of vassal states and militias, controlled from Tehran, stretching from Iran through Iraq, into Syria, connecting with Lebanon and reaching from the Persian Gulf to the Mediterranean Sea. He was its creator, chief strategist and enforcer.

Just last month, when anti-Iran protests ripped through Iraq (including for the first time in many Shi’a dominated areas), it was Soleimani who flew to Baghdad, actually chaired a meeting of the Iraqi government, and ordered the Iraqi military to put down the protests using massive force. There is little doubt that he either ordered or acquiesced in the large increase in attacks by Kataib Hezbollah, the Iraqi Shi’a militia known in English as the Iraqi Popular Mobilization Forces or PMF. This culminated in the murder of an American civilian contractor and the attempted storming of the American Embassy in Baghdad earlier this week. In fact, killed with Soleimani was the leader of the PMF, Abu Mahdi al-Muhandis. Clearly, the two weren’t in Baghdad talking about the weather.

Soleimani’s assassination was a massive escalation by the Trump Administration of the lower level proxy war that Iran has been fighting for dominance in the Middle East. Through clients like the PMF, the Houti Militia in Yemen, Hezbollah in Lebanon and to some extent Hamas in Gaza, Iran has reached for control over the entire Middle East. The Iranians have been ruthless in doing so, willing to destabilize entire countries in order to get their way, calling all the while for the destruction of Israel and an end to American influence throughout the region. Recently, they announced joint naval exercises with Russia and China as a way to bolster their claims of military power and influence.

As the Iranian government has done so, however, it has left its own people behind. Iranian adventurism costs billions. Every Iranian rial spent on weaponry for foreign fighters means one fewer rial available to feed, clothe and shelter Iranians. Last month, new protests arose in Iran against the Iranian government and the spending of Iran’s national treasure overseas. As in Iraq, these Iranian protests for the first time included riots in formerly pro-government areas. The Mullahs had to cut off the internet, then watch as the IRGC and the internal Majlis security police fought almost warlike battles against protestors in order to quell the demonstrations. Hundreds of Iranians died, if not thousands. The internet now has been mostly restored to Iran and the protests smothered, but the bitterness of the people toward their government is more pronounced than ever.

It was against this backdrop that President Trump ordered Soleimani killed. Make no mistake, the assassination is a major escalation. There is no way to predict where this ends. The attack constitutes a big gamble by President Trump with an unknown, and extremely dangerous outcome. Recent history proves the old adage that it’s easier to start a war than to end it.

Iran clearly now has to respond. If history holds it will act asymmetrically, like getting one of its proxies to attack American interests. That could happen anywhere in the world, but it would have its greatest impact should it occur either on US soil or in the Middle East.

However, Iran’s leaders have a very difficult calculation to make. Unlike certain of his predecessors, President Trump shows he will not just back down, and that he cares little about world opinion. When the President said he would hold Iran directly responsible for the Baghdad embassy storming he obviously meant it. The highest reaches of the Iranian government and military now know this. In their mind they must respond, but economically the power relationship structure is all in the United States’ favor. Thanks to the shale revolution, Americans have little fear of a Middle East oil stoppage, which was not always the case. Iranians, on the other hand, already are risking death to protest Iranian government policies that favor foreign wars over feeding Iranian families.

The Mullahs first have to decide how far they are willing to go and risk a direct military confrontation with the United States. Iran has lots of options and lots of proxies, but the Mullahs now know that an attack by any of them may bring retaliation right down on their heads. Will the Iranian public support them if this escalates? Today there were large pro-government demonstrations in Tehran, but to quote Thomas Friedman the Iranian power structure has to be wary of “the day after the day after.”

I have written numerous times about the importance of shale in enhancing the security of the United States – and not just in an economic sense. Today perhaps is its greatest example. Oil prices surged 4% immediately after news of the Soleimani killing, but that’s little compared to the 14% spike in oil prices that happened in September after Soleimani either ordered or allowed a missile strike on Saudi Arabia’s main oil production facility. American energy vulnerability is localized now, with places like New York and New England being most at risk due to their determination to prevent oil and gas pipelines from connecting their areas to domestic supply.  The weather early in 2020 is mild in the Northeast, but if it turns very cold spot prices for oil and natural gas in New York and New England could surge to levels never before seen, all due to pipeline politics. Should that happen, the impact on the 2020 Presidential race could be significant.

Back in Iran, although some Iranians may wax bellicose about the Soleimani assassination, they must be very troubled inside. Iran has many options, but few of them are good. The Iranians don’t want a hot war with the United States, but now are not sure how to continue with their expansionism while avoiding it. Historically, wars can be stumbled into just as easily as they can be started by choice. The Iranians know, however, that if war starts with the United States now in any capacity, it will start with this country in a position of maximum economic strength and with Iran in a position of maximum economic weakness.