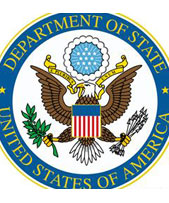 Pompeo said he had redesignated Iran as a “country of particular concern” for religious freedom, a status that adds a layer of potential sanctions against the government. He also said the administration would enact travel bans on officials found to have violated human rights, as well as their families.

“The United States has stood, and will stand under President Trump, for the Iranian people,” Pompeo said in a speech at the State Department. “The appeasement of the regime simply will not work.”

The sanctions announced by the Treasury Department freeze any assets the two judges may have in U.S. jurisdictions and bar Americans from any transactions with the judges The sanctions will also affect foreigners doing business with the judges, who sit at the top of two branches of the Tehran Revolutionary Court.

“Abolghassem Salavati and Mohammad Moghisseh oversaw the Iranian regime’s miscarriage of justice in show trials in which journalists, attorneys, political activists, and members of Iran’s ethnic and religious minority groups were penalized for exercising their freedom of expression and assembly and sentenced to lengthy prison terms, lashes, and even execution,” the department said in a statement.

Salavati runs Branch 15 of the Revolutionary Court. The statement said he had sentenced so many people to capital punishment that he is nicknamed the “the Judge of Death.” Moghisseh presides over Branch 28 of court, and the statement said he had sentenced numerous artists to lengthy sentences for “collusion against national security and propaganda against the state allegedly found in their artwork.”