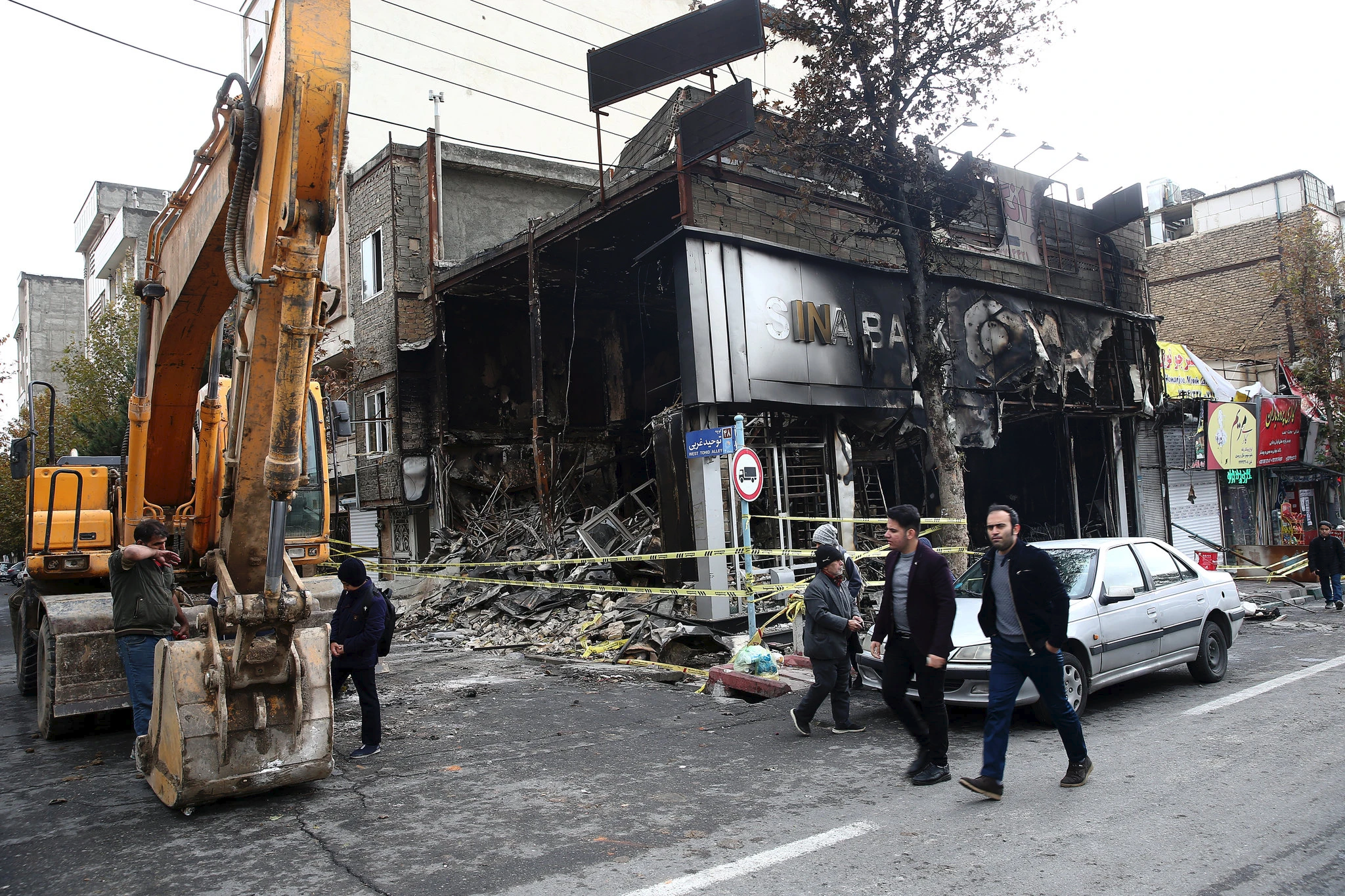 It began two weeks ago with an abrupt increase of at least 50 percent in gasoline prices. Within 72 hours, outraged demonstrators in cities large and small were calling for an end to the Islamic Republic’s government and the downfall of its leaders.

In many places, security forces responded by opening fire on unarmed protesters, largely unemployed or low-income young men between the ages of 19 and 26, according to witness accounts and videos. In the southwest city of Mahshahr alone, witnesses and medical personnel said, Islamic Revolutionary Guards Corps members surrounded, shot and killed 40 to 100 demonstrators — mostly unarmed young men — in a marsh where they had sought refuge.

“The recent use of lethal force against people throughout the country is unprecedented, even for the Islamic Republic and its record of violence,” said Omid Memarian, the deputy director at the Center for Human Rights in Iran, a New York-based group.

Altogether, from 180 to 450 people, and possibly more, were killed in four days of intense violence after the gasoline price increase was announced on Nov. 15, with at least 2,000 wounded and 7,000 detained, according to international rights organizations, opposition groups and local journalists. 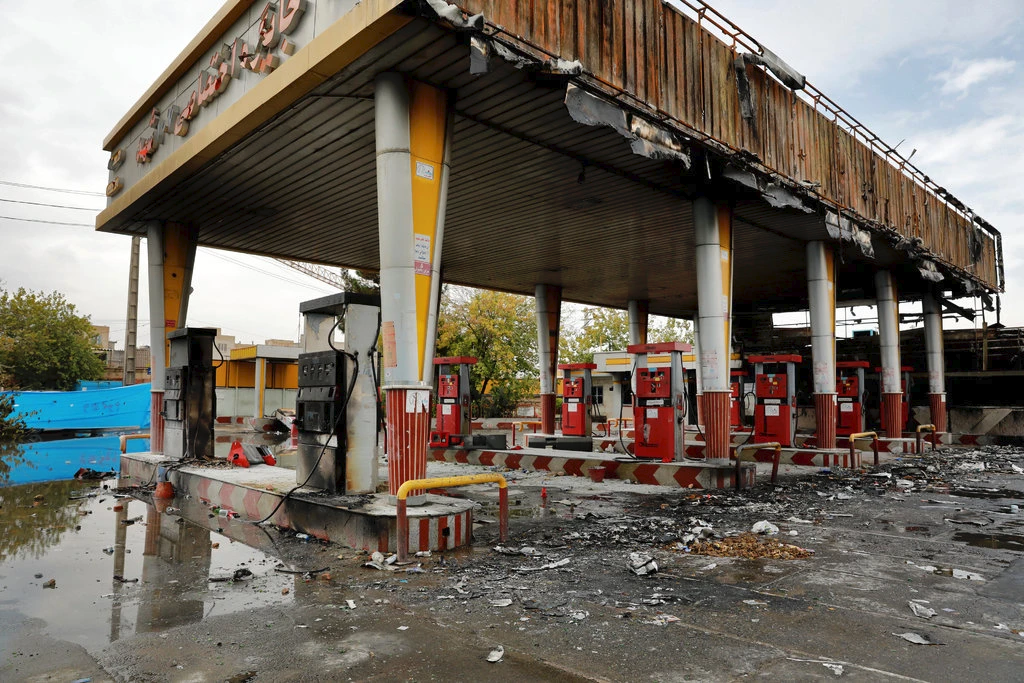 A gas station in Tehran. An abrupt increase of gasoline prices escalated into the deadliest political unrest to convulse Iran in the 40 years since the Islamic revolution.Credit…Ebrahim Noroozi/Associated Press

The last enormous wave of protests in Iran — in 2009 after a contested election, which was also met with a deadly crackdown — left 72 people dead over a much longer period of about 10 months.

Only now, nearly two weeks after the protests were crushed — and largely obscured by an internet blackout in the country that was lifted recently — have details corroborating the scope of killings and destruction started to dribble out.

The latest outbursts not only revealed staggering levels of frustration with Iran’s leaders, but also underscored the serious economic and political challenges facing them, from the Trump administration’s onerous sanctions on the country to the growing resentment toward Iran by neighbors in an increasingly unstable Middle East.

The gas price increase, which was announced as most Iranians had gone to bed, came as Iran is struggling to fill a yawning budget gap. The Trump administration sanctions, most notably their tight restrictions on exports of Iran’s oil, are a big reason for the shortfall. The sanctions are meant to pressure Iran into renegotiating the 2015 nuclear agreement between Iran and major world powers, which President Trump abandoned, calling it too weak.

Most of the nationwide unrest seemed concentrated in neighborhoods and cities populated by low-income and working-class families, suggesting this was an uprising born in the historically loyal power base of Iran’s post-revolutionary hierarchy.

Many Iranians, stupefied and embittered, have directed their hostility directly at the supreme leader, Ayatollah Ali Khamenei, who called the crackdown a justified response to a plot by Iran’s enemies at home and abroad. 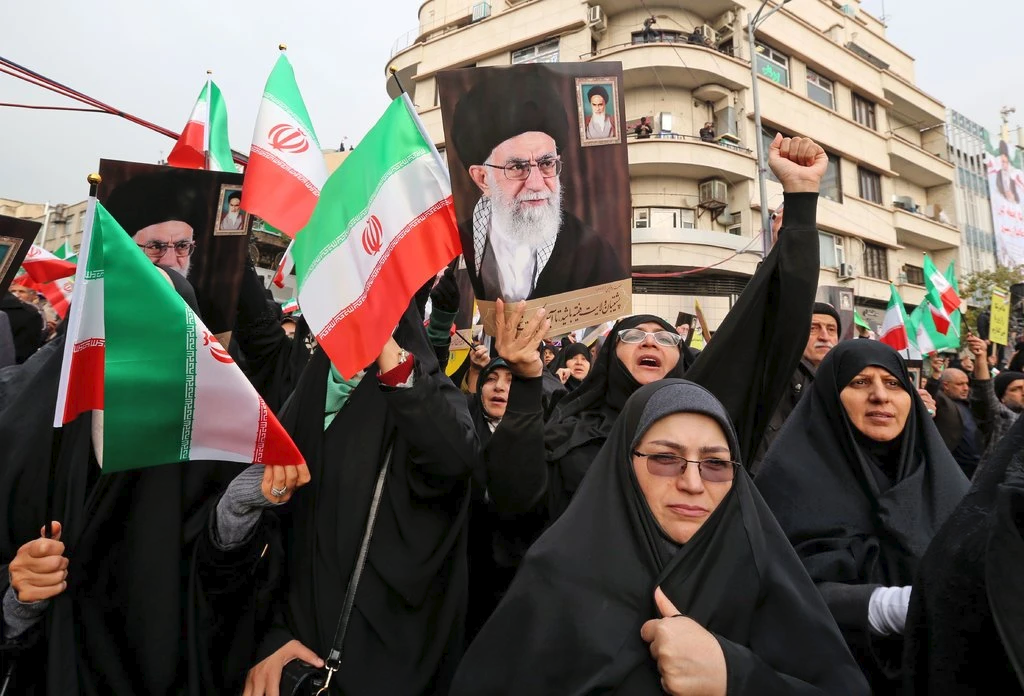 A pro-government demonstration in the capital, Tehran, in November.Credit…Atta Kenare/Agence France-Presse — Getty Images

In a statement posted Saturday on an opposition website, Mr. Moussavi, who has been under house arrest since 2011 and seldom speaks publicly, blamed the supreme leader for the killings. He compared them to an infamous 1978 massacre by government forces that led to the downfall of Shah Mohammed Reza Pahlavi a year later, at the hands of the Islamic revolutionaries who now rule the country.

The authorities have declined to specify casualties and arrests and have denounced unofficial figures on the national death toll as speculative. But the nation’s interior minister, Abdolreza Rahmani Fazli, has cited widespread unrest around the country.

On state media, he said that protests had erupted in 29 out of 31 provinces and 50 military bases had been attacked, which if true suggested a level of coordination absent in the earlier protests. Iran’s official media have reported that several members of the security forces were killed and injured during the clashes.

The worst violence documented so far happened in the city of Mahshahr and its suburbs, with a population of 120,000 people in Iran’s southwest Khuzestan Province — a region with an ethnic Arab majority that has a long history of unrest and opposition to the central government. Mahshahr is adjacent to the nation’s largest industrial petrochemical complex and serves as a gateway to Bandar Imam, a major port.

The New York Times interviewed six residents of the city, including a protest leader who had witnessed the violence; a reporter based in the city who works for Iranian media, and had investigated the violence but was banned from reporting it; and a nurse at the hospital where casualties were treated.

They each provided similar accounts of how the Revolutionary Guards deployed a large force to Mahshahr on Monday, Nov. 18, to crush the protests. All spoke on condition of anonymity for fear of retribution by the Guards.

For three days, according to these residents, protesters had successfully gained control of most of Mahshahr and its suburbs, blocking the main road to the city and the adjacent industrial petrochemical complex. Iran’s interior minister confirmed that the protesters had gotten control over Mahshahr and its roads in a televised interview last week, but the Iranian government did not respond to specific questions in recent days about the mass killings in the city. 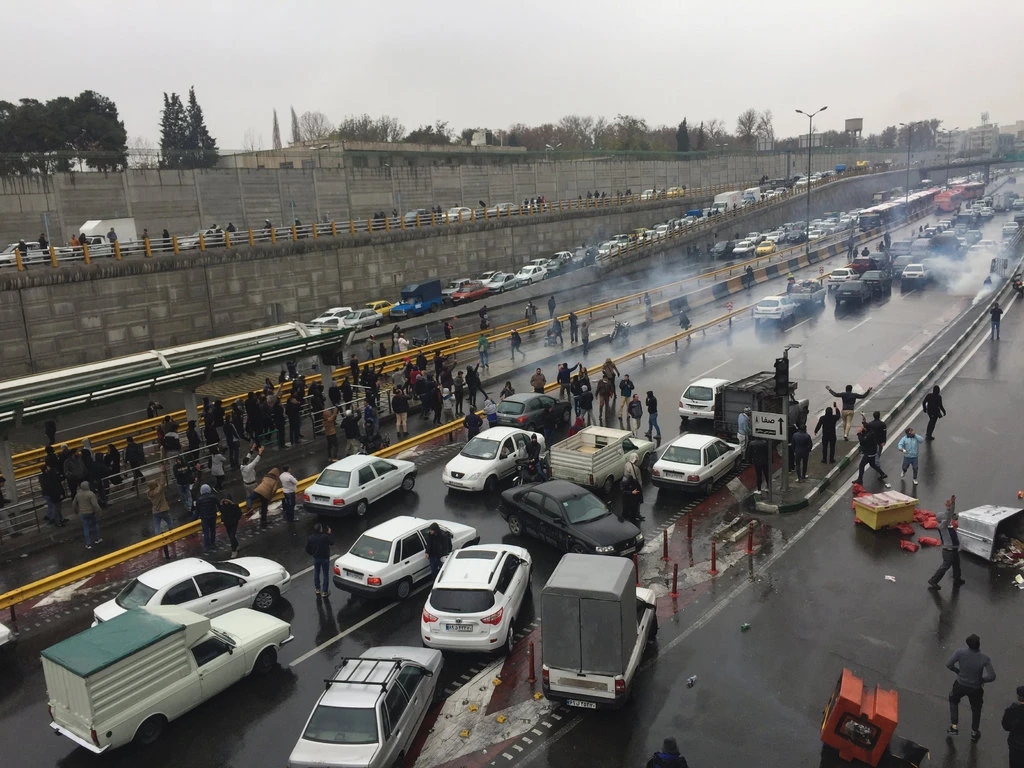 Protesting the gas prices on a highway in Tehran in November. Credit…Wana News Agency/Via Reuters 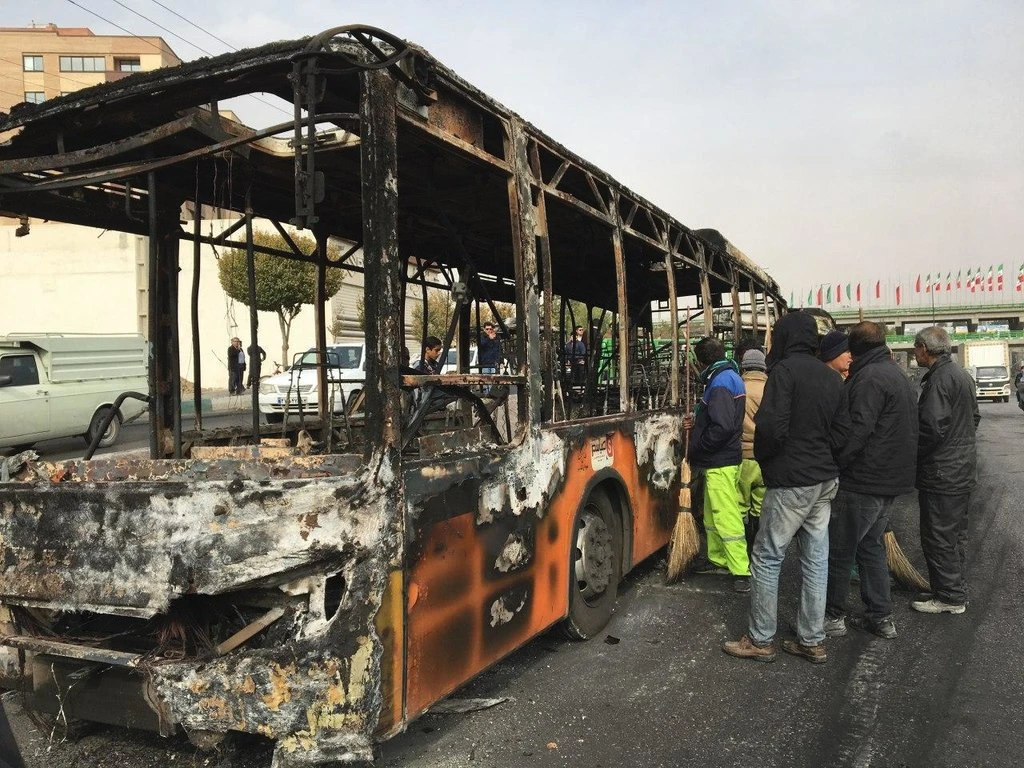 The wreckage of a bus in Isfahan, Iran.Credit…Agence France-Presse — Getty Images

Local security forces and riot police officers had attempted to disperse the crowd and open the roads, but failed, residents said. Several clashes between protesters and security forces erupted between Saturday evening and Monday morning before the Guards were dispatched there.

When the Guards arrived near the entrance to a suburb, Shahrak Chamran, populated by low-income members of Iran’s ethnic Arab minority, they immediately shot without warning at dozens of men blocking the intersection, killing several on the spot, according to the residents interviewed by phone.

The residents said the other protesters scrambled to a nearby marsh, and that one of them, apparently armed with an AK-47, fired back. The Guards immediately encircled the men and responded with machine gun fire, killing as many as 100 people, the residents said.

The Guards piled the dead onto the back of a truck and departed, the residents said, and relatives of the wounded then transported them to Memko Hospital.

One of the residents, a 24-year-old unemployed college graduate in chemistry who had helped organize the protests blocking the roads, said he had been less than a mile away from the mass shooting and that his best friend, also 24, and a 32-year-old cousin were among the dead.

He said they both had been shot in the chest and their bodies were returned to the families five days later, only after they had signed paperwork promising not to hold funerals or memorial services and not to give interviews to media.

The young protest organizer said he, too, was shot in the ribs on Nov. 19, the day after the mass shooting, when the Guards stormed with tanks into his neighborhood, Shahrak Taleghani, among the poorest suburbs of Mahshahr.

He said a gun battle erupted for hours between the Guards and ethnic Arab residents, who traditionally keep guns for hunting at home. Iranian state media and witnesses reported that a senior Guards commander had been killed in a Mahshahr clash. Video on Twitter suggests tanks had been deployed there.

A 32-year-old nurse in Mahshahr reached by the phone said she had tended to the wounded at the hospital and that most had sustained gunshot wounds to the head and chest.

She described chaotic scenes at the hospital, with families rushing to bring in the casualties, including a 21-year-old who was to be married but could not be saved. “‘Give me back my son!,’” the nurse quoted his sobbing mother as saying. “‘It’s his wedding in two weeks!’”

The nurse said security forces stationed at the hospital arrested some of the wounded protesters after their conditions had stabilized. She said some relatives, fearing arrest themselves, dropped wounded loved ones at the hospital and fled, covering their faces.

On Nov. 25, a week after it happened, the city’s representative in Parliament, Mohamad Golmordai, vented outrage in a blunt moment of searing antigovernment criticism that was broadcast on Iranian state television and captured in photos and videos uploaded to the internet.

“What have you done that the undignified Shah did not do?” Mr. Golmordai screamed from the Parliament floor, as a scuffle broke out between him and other lawmakers, including one who grabbed him by the throat.

The local reporter in Mahshahr said the total number of people killed in three days of unrest in the area had reached 130, including those killed in the marsh.

In other cities such as Shiraz and Shahriar, dozens were reported killed in the unrest by security forces who fired on unarmed protesters, according to rights groups and videos posted by witnesses.

“This regime has pushed people toward violence,” said Yousef Alsarkhi, 29, a political activist from Khuzestan who migrated to the Netherlands four years ago. “The more they repress, the more aggressive and angry people get.”

Political analysts said the protests appeared to have delivered a severe blow to President Hassan Rouhani, a relative moderate in Iran’s political spectrum, all but guaranteeing that hard-liners would win upcoming parliamentary elections and the presidency in two years.

The tough response to the protests also appeared to signal a hardening rift between Iran’s leaders and sizable segments of the population of 83 million.